One of the most hotly debated topics in tuning Hondas is the perceived benefits of aftermarket spark-plug cables. These are often marketed with the promise of 'better' and 'more powerful' sparks and thus directly inferring better combustion and a gain in power output. Armchair 'tuning specialists', enthusiasts, and even mechanics alike have discussed about the supposed mediocre sparking qualities of the stock Honda spark-plug cables and, especially at high RPMs typical when revving VTEC Hondas, how the stock cables will be struggling to produce good consistent sparks. Aftermarket cables comes into the picture claiming to produce better, 'larger' and more consistent sparks at high RPMs and therefore higher power output. How true are these claims ?

To clear the mystery and resolve this debate once and for all, TOVA requested Dynojet Far East to perform a spark-plug cables dyno test.

The car used is a JDM Honda Integra XSi with the B16A engine. The stock plug cable has been in use for the better part of 8 years. At this age, many will begin recommending their replacement by aftermarket cables, often citing that they will be worn out and thus not giving good sparks.

The car has been regularly serviced (either 5000km or 3 months whichever expires first) using original Honda oil filter and Mobil-1 synthetic engine oil. At the time of the test, all maintenance items are new; spark plugs, HKS Super-Power-Flow filter element, even gear oil (using Honda recommended oil). The fuel injectors have also been cleaned less than 4 months ago. The car has also just benefited from the fitament of brand new HKS Legal Muffler and HKS Super-Header, with a HKS AFR to re-calibrate the air-fuel ratio to our local atmospheric conditions.

Aftermarket cable number 1 represents the generic 8mm silicon 'high performance' replacement cables. Often these cables are marketed by performing a side-by-side comparison on a special setup where first the stock cable are used to connect a spark-plug to an ignition coil. The sparks produced at the plug will be seen to be weak and dull. Next, replacement of the 8mm silicon cable will be done and now the sparks at the plug can clearly be seen to be bright and strong. From this 'conclusive' demonstration, the benefits to power output will be inferred. I will not be embarrassed to admit that I myself have bought three sets of such cables in my earlier Honda ownership days (when I was driving SOHC engine models), often being conclusively convinced by the demonstration and then actually believing that I felt improvements from the cables. I have owned this cable for about 5 years, using them on and off.

Aftermarket cable number 2 is the famous NGK 'blue' cable, ie NGK Hyper Silicon. Having the same diameter as stock cables (and thus the added advantage of direct replacement), the NGK is a cable that even HKS has recommended over stock. The logic given was often that the NGK will last longer than stock as well as the typical giving 'better' spark benefits. In fact, the box that the NGK comes in has a claim of 130% better sparks - hence more power from the engine. The NGK cables are brand new, and supplied by Dynojet Far East to help settle the debate.

The dyno runs were performed immediately one after the other, with only the minimum of delay necessitated by having to switch off the engine to replace the plug cables. To get straight to the point, the three dyno runs are produced below. The power curves are: green is for the stock cable, red for the generic 8mm silicon, and blue for the NGK blue cable. 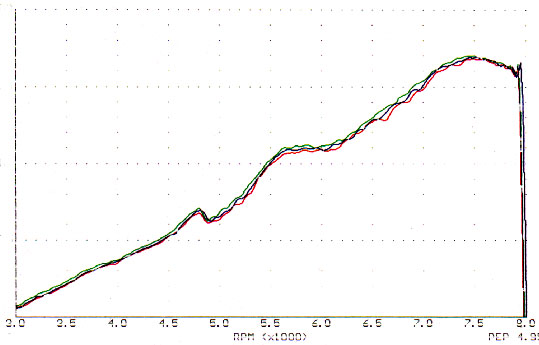 The actual power outputs are not crucial and have been removed from the charts to make the comparison more straightforward. The most important point from the charts is that the stock spark-plug cables produced the highest and most consistent power curve. The most significant factor is the smoothness of the stock cable's power curve. Both the 'generic' 8mm silicon cable and the NGK were seen to be misfiring as evidenced by their jagged curves after 5000rpm and especially in the VTEC rpm band. Both 8mm silicon and NGK delivered about the same max power which is about 1ps lower than that produced by the stock cables. Note that the stock cables, although 8 years old, consistently produced better power all across the dynoed rpm band, 3000rpm till the 8000rpm red-line. Especially surprising is the fact that the stock cables did not misfire, thus proving that they produce more consistent sparks even compared to the brand new and supposedly superior NGK blue cables !

The results although probably shocking to many enthusiasts are in fact what have often been recommended by the best tuners. Many enthusiasts naturally are reluctant to accept the fact, no matter how highly they respect those tuners but with this comparison, TOVA hopes that the question have been conclusively answered and the debates are now closed. Stock spark-plug cables are the best !