I saved the polish to my wishlist though.

Gorilla super glue, because I had some laying around and that’s pretty much what they used from the factory.

I was also very careful with it and used the toothpick method to apply as little as possible. 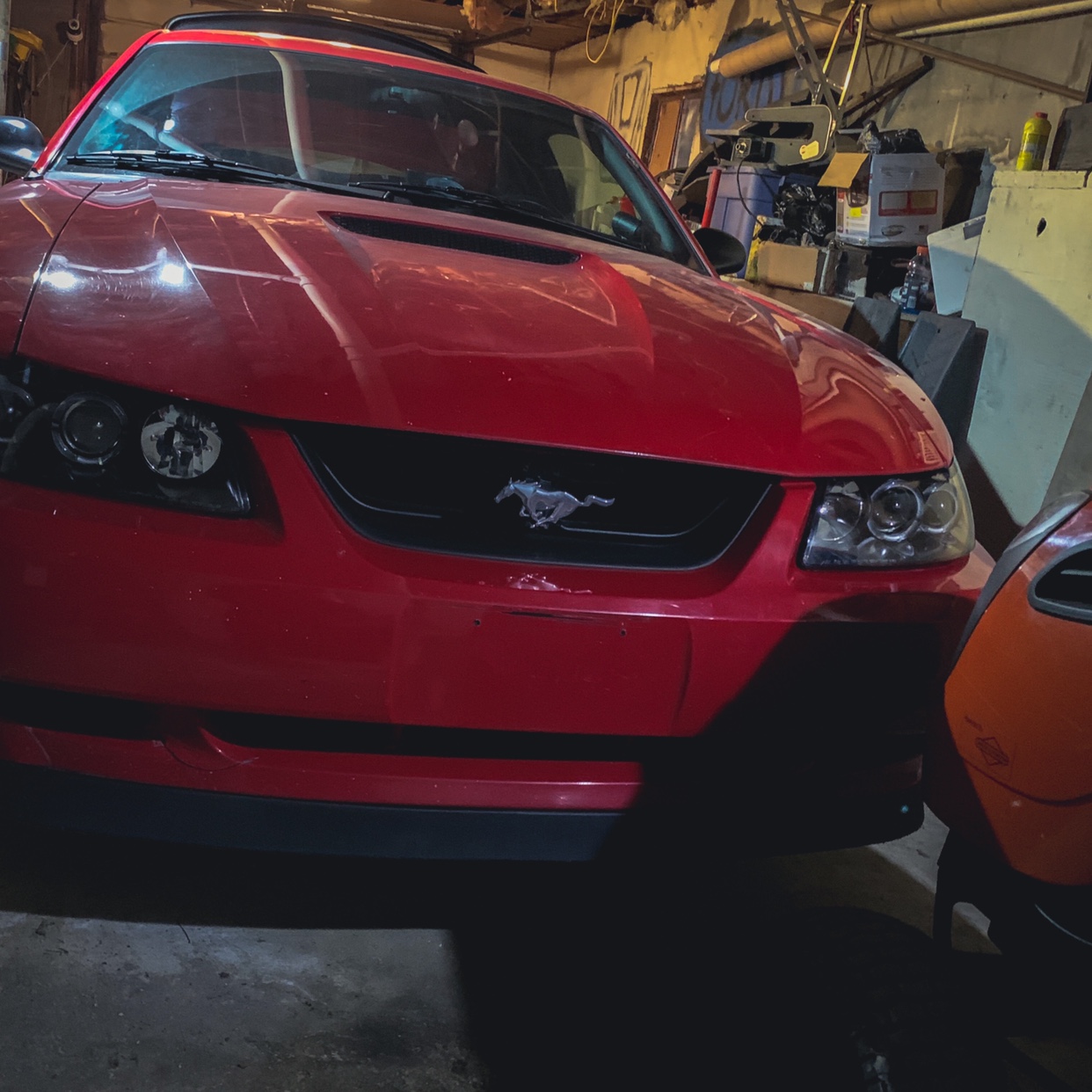 Got some freebies to hold me over until I breakdown and buy some black housings and retrofit em. Little ricey, but not the end of the world.

[emoji23] you get new headlights as I spent the past few hours working on the headlights of my van and my dad’s truck. Found some cheap LED’s on amazon ($16) and decided to try em on both trucks after polishing them up.


Did those Hikari’s fit into the new headlights?

Nah these are H1’s

I’m gonna run the hikari’s in the truck for a little bit since I’m only driving it right now.

As I said, they’re temporary, he just offered them to me and since they’re not sunburnt or anything I went for them.

I’ve also been thinking about running cheap LED’s just to try them. The hikari’s are good, but the mustang bro got some eBay ones and they’re damn near identical.

Those were also the old model Hikari’s with the Cree chips. Fucking $70 when I bought them originally, now they’re down to $30 since the Ultras with the Philips chips came out at $90.... which I paid $40 on a lightning sale [emoji23]

Just grabbed this for $50 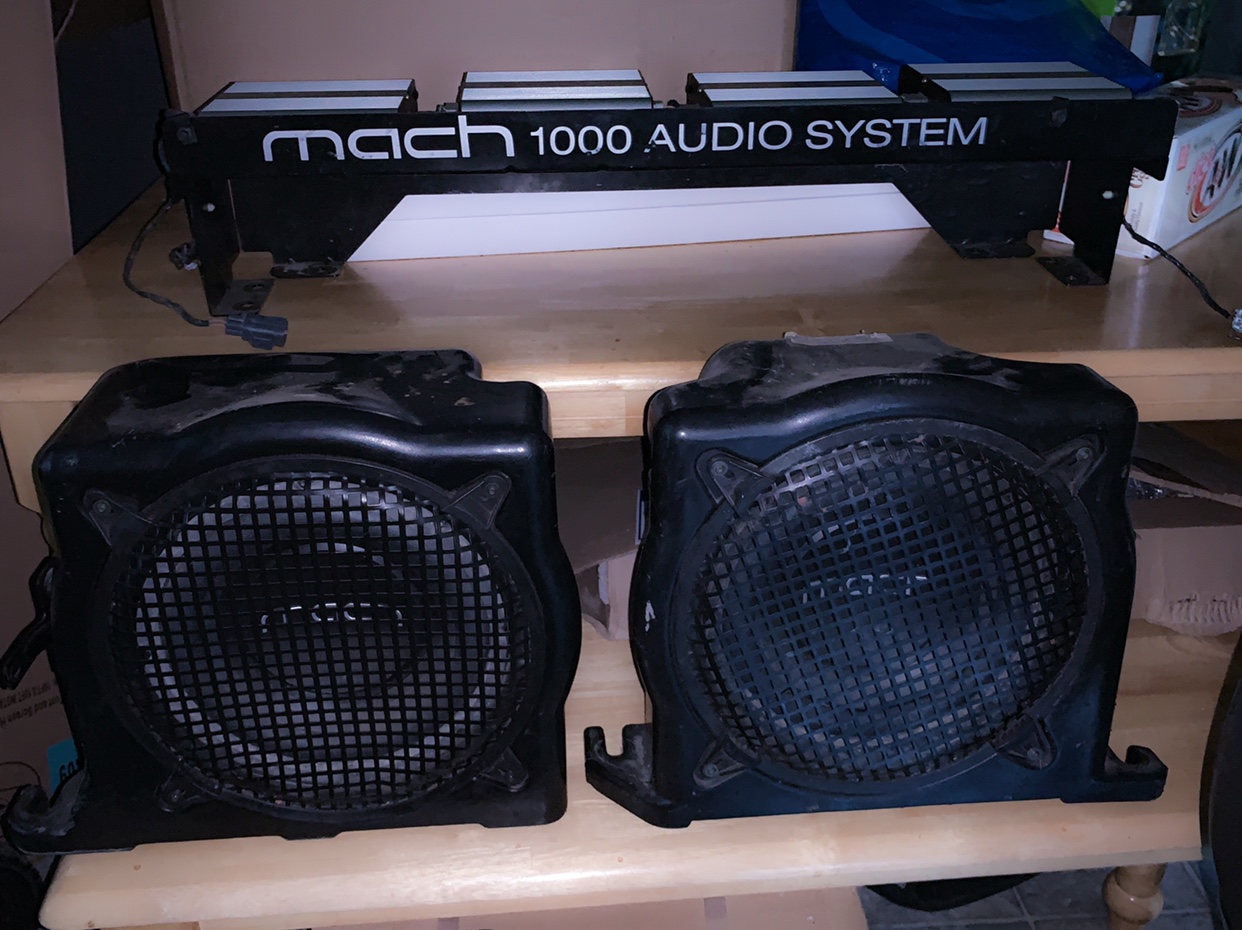 Factory stereo system:
The Mustang's standard stereo was an 80-watt, 4-speaker system featuring an AM/FM/CD player that gained the ability to play MP3 files in 2002. The next step up was the Mach 460 system, which offered a 6-disc AM/FM/CD receiver with, coincidentally enough, 460 watts of stereo output pumping through a total of eight speakers.

Mind you, that's the peak power rating, not the more meaningful RMS rating, but that's still a ton of power for a "factory" system. The Mach 460's added power came from a pair of amps mounted between the rear seats and the trunk. The amps took care of the lower door speakers and rear deck speakers, while the front and rear tweeters ran off the stock receiver.

With ten speakers and six amps, the Mach 1000 system, which debuted in '02, was to factory audio what the old Boss 429 Mustang was to factory horsepower – wonderful, glorious, American excess. The trunk was a veritable stereo shop on wheels, two enclosed subs on the sides and the four amps that powered them lined up on a rack in the center.

Needless to say, the Mach 1000 produced a prodigious amount of power. An aftermarket system will sound better, especially after all these years, but Ford deserves massive credit for shoehorning a real hot rod of a system into this car.
Click to expand...

My car came with the Mach 460, but I bypassed it, it’s still there, I just have to rewire my head unit again, but to keep it fairly short: The Mach 460 was a x4 6x8 “midrange” speaker setup, with tweeters mounted on the interior side of the doors on the plates behind where the mirrors mount, in a box mounted under the rear deck panel next to the rear windshield speakers, and 2 amps for speakers, pretty common on 99-04’s, not so much 94-98’s, and the Mach 1000 is the fairly rare optional upgrade only system with 1100~watts peak power, 2 factory fitted ABS plastic sub boxes instead of heavy ass MDF, subs, and amps for both speakers and subs. I wouldn’t have sought them out myself since they are around $400 on ebay, but he gave me a killer deal on them, and they do have some significance so it’s definitely a cool part to add to my car. They need cleaning, and the subs need the foam surrounds replaced, but me and my brother have both done that on some old Japanese speakers our dad brought back when he was in the military so it’s not a new process to me. 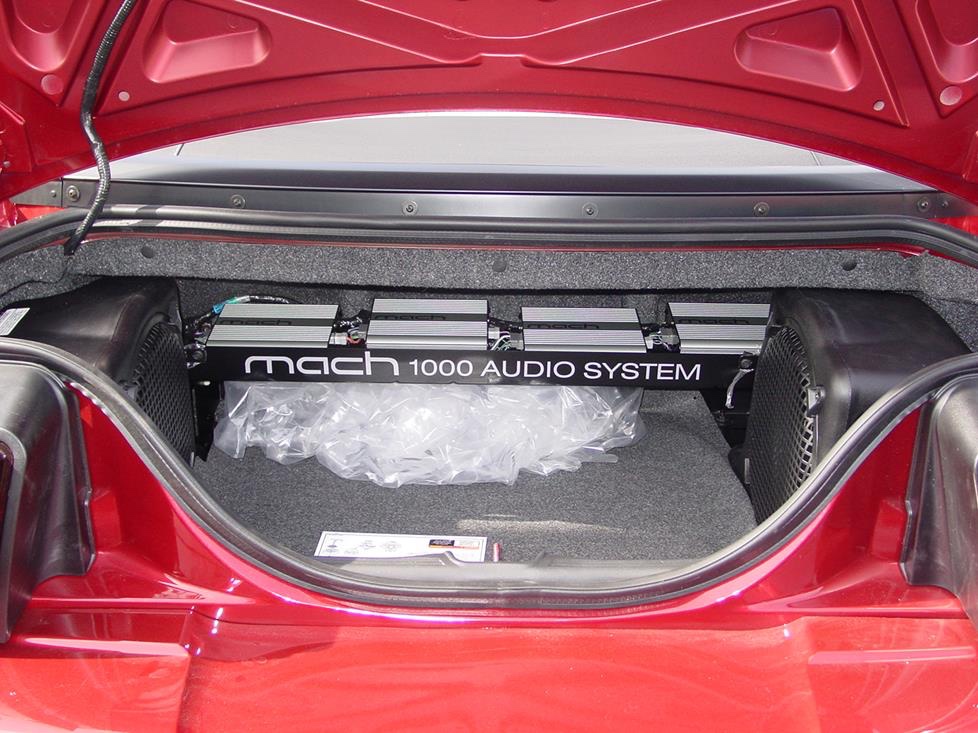 (Not my car, just forgot to include and installed pic) 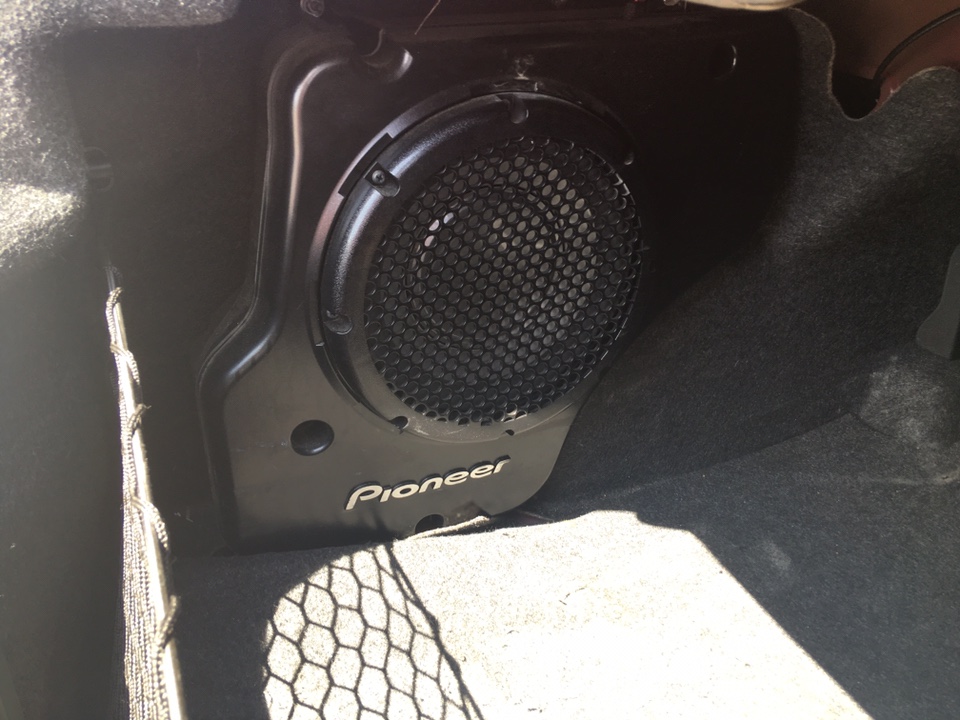 The fucking factory Pioneer amp sits behind the steering column, but it’s also only like 260 watts [emoji23]

I’m thinking I’m gonna use thumb screws or something fast for when I need the trunk since everything uses plugs to connect... because I removed the Mach 460 box because it kept getting in my damn way [emoji23] The 460 system is in an ABS box that’s like 10” thick, by 3.5ft wide and mounts in the top of the trunk so you basically couldn’t put anything thicker than like 14 inches in the trunk and you always overestimated how much space you had because you couldn’t see the damn box [emoji23] 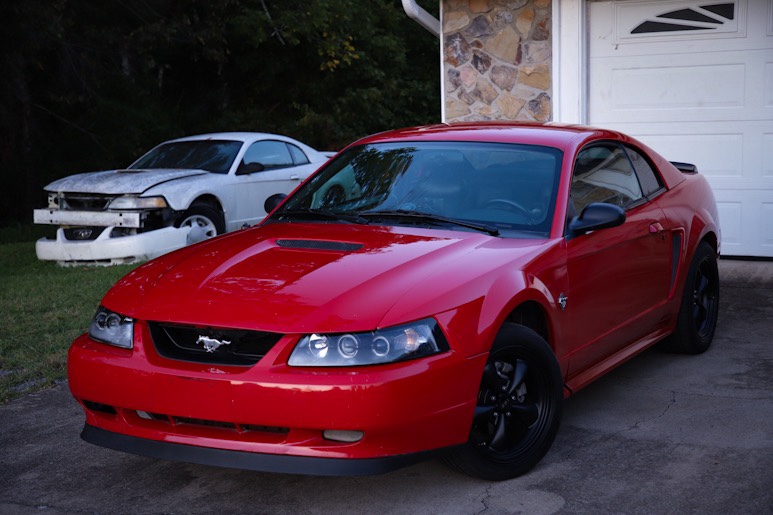 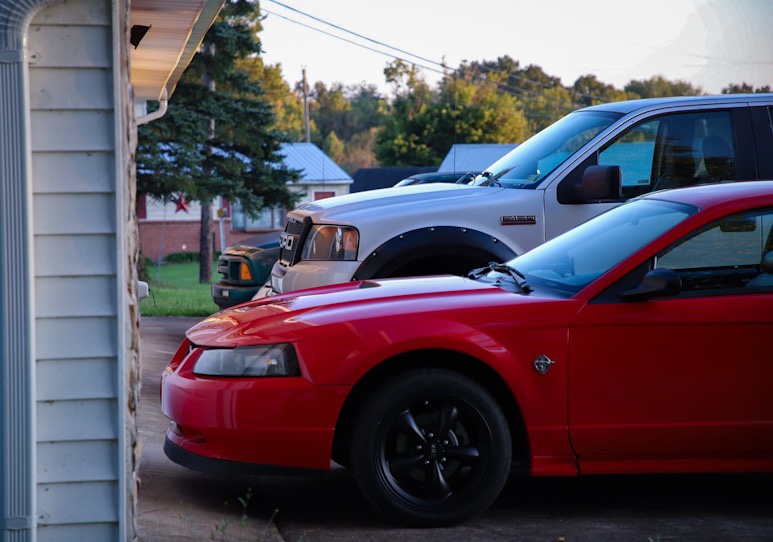 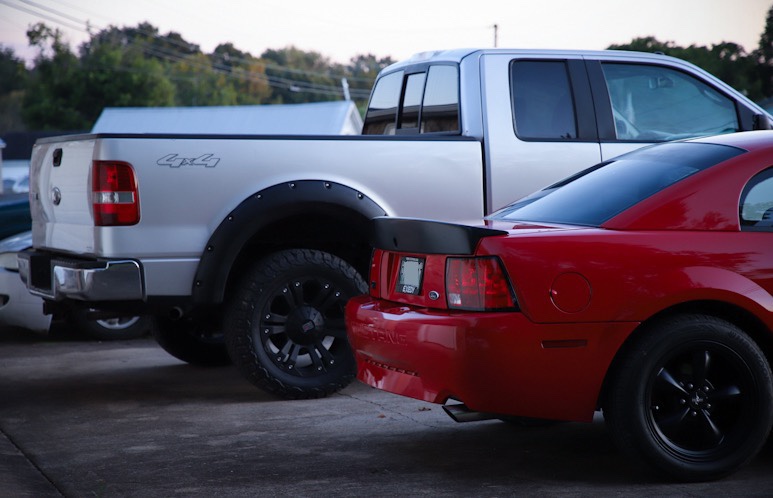 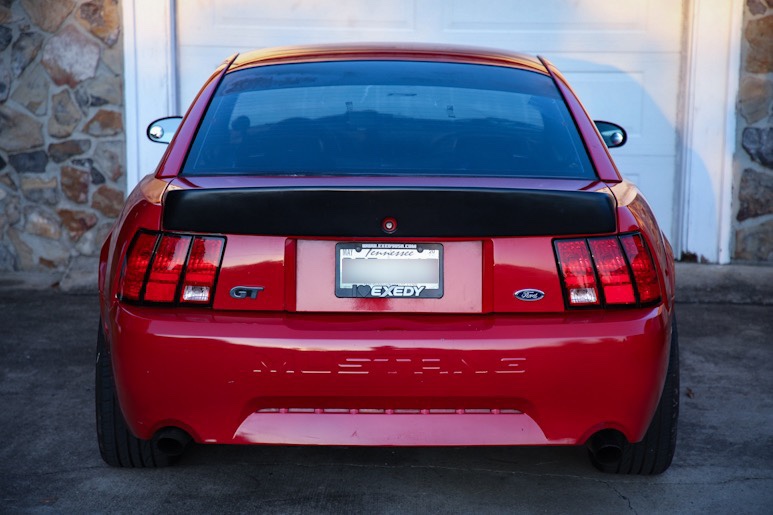 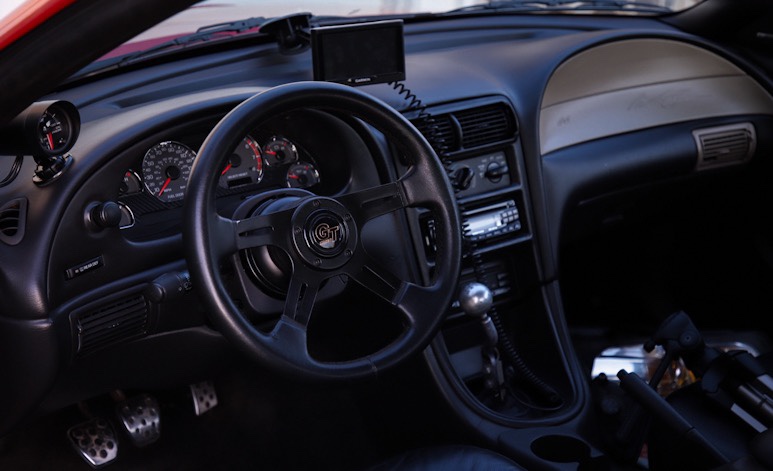 Dug it out, re-plastidipped the wheels, washed it, drove it. Still needs the exhaust flange leak fixed, and a new starter, but it still starts most of the time.

Ricer headlights were loaners from a friend in case I haven’t posted them yet, my chrome ones were starting to look shitty on top of being chrome [emoji23] 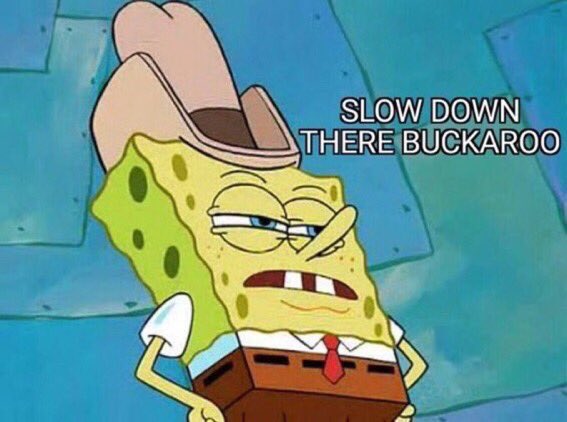 What the hell is happening with the white V6 in the background of the first pic? And why the hell do you still have random tan pieces in your interior lol
You must log in or register to reply here.